Tomorrow's Message: Master of the Universe 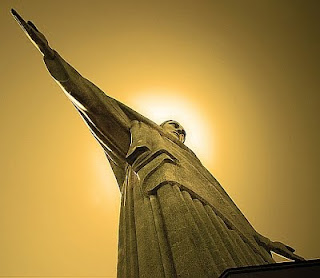 I literally have read the passage I am about to paste below dozens of times this week from several different versions. At this point I have consulted the lexicons to examine whether any of the meaning inherent in the original Greek was lost in translation. I've looked at word order, tenses, and the context this text lies in.

During the week I learned about "Pauline Hymns" - passages that Paul inserted into the Scripture under God's direction that were being circulated and sung as hymns of praise. Commentaries and other pastor's sermons have been devoured as I kept driving deeper and deeper. Of Jesus and His mercy, power, and grace there is no end. The rest of my life could be spent studying and contemplating these few verses of Scripture.

Sunday cannot get here fast enough for me.


If we open such books as Grimm's Fairy Tales or the Italian epics, we find ourselves in a
world of miracles so diverse that they can hardly be classified. Beasts turn into men and men
into beasts or trees. Trees talk, ships become goddesses, and a magic ring can cause tables
richly spread with food to appear in solitary places. Now if such things really happened, they
would, I suppose, show that nature was being invaded. But they would show that she was
being invaded by an alien power. The fitness of the Christian miracles, and their difference
from these mythological miracles, lies in the fact that they show an invasion by a power
which is not alien. They are what might be expected to happen when nature is invaded, not
simply by a god, but by the God of nature, by a power which is outside nature's jurisdiction,
not as a foreigner but as a Sovereign. They proclaim that he who has come is not merely a
king but the King---nature's King and ours!
If you cannot get to New Hope tomorrow, then pick up your Bible and read this passage. Then let God speak of Who Jesus is.

15 We look at this Son and see the God who cannot be seen. We look at this Son and see God's original purpose in everything created. 16 For everything, absolutely everything, above and below, visible and invisible, rank after rank after rank of angels—everything got started in him and finds its purpose in him. 17 He was there before any of it came into existence and holds it all together right up to this moment. 18 And when it comes to the church, he organizes and holds it together, like a head does a body. He was supreme in the beginning and—leading the resurrection parade—he is supreme in the end. From beginning to end he's there, towering far above everything, everyone. 19 So spacious is he, so roomy, that everything of God finds its proper place in him without crowding. 20 Not only that, but all the broken and dislocated pieces of the universe—people and things, animals and atoms—get properly fixed and fit together in vibrant harmonies, all because of his death, his blood that poured down from the Cross. 21 You yourselves are a case study of what he does. At one time you all had your backs turned to God, thinking rebellious thoughts of him, giving him trouble every chance you got. 22 But now, by giving himself completely at the Cross, actually dying for you, Christ brought you over to God's side and put your lives together, whole and holy in his presence. 23 You don't walk away from a gift like that! You stay grounded and steady in that bond of trust, constantly tuned in to the Message, careful not to be distracted or diverted. There is no other Message—just this one. Every creature under heaven gets this same Message. I, Paul, am a messenger of this Message. Col 1:15-23 (MSG)
Posted by David Wilson at 8:24 PM