If we only understood this 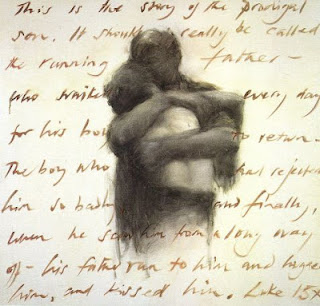 We've been walking through the parable in Luke 15 called "The Prodigal Son" through the lens of Tim Keller, who has renamed it "the Prodigal God." I keep reading and reading about this passage of Scripture - its context, the text through other translations, other commentator's opinions - and reading the text again and again.

It's been profoundly affecting.

Events going on in our nation have helped us see we have more of an elder brother problem than an avalanche of prodigals.

Then we've seen the seeds of rebellion and selfishness in ourselves.

But seeing what the father was willing to do to try and redeem his son...

He ran. In fact he out ran the villagers who were coming out to cut his son off permanently. It was a Jewish custom to meet those trying to return home after disgracing the town and dash a clay pot to the ground. The idea was just as that pot was shattered and never to be repaired, the relationships were broken forever.

The father beat them there. In a culture where no man his age would ever run, he ran.

And he'll run to you.

And it's yours if you'll only accept it.
Posted by David Wilson at 10:42 PM 0 comments

The Message IS the Messenger

I soon will celebrate some milestone anniversaries in my life. On August 6th, I'll remember a nervous young man who was riding down a dirt road with his beloved in a 1973 Vega notchback ( no pictures of such a car still exist because it was so... Vega) and asked what to that time were the most important words I had ever spoken. "Will you marry me?"

The impact of those words and the answer I received has given my life such a richness of love I can hardly keep from crying. My love, my wife, and through her, my family - my sons and grandson - joy!

Just one month later I will remember the most important words I ever spoke. I walked down an aisle at Bethesda Baptist church, leaving my fiance standing at the pew I had just left, and grabbed the hand of the pastor and told him I wanted to become a Christian.

I loved that church, that pastor, and those people.

But I wasn't coming to get my name on a roll, or get a vote at the business meetings. I came that day because Jesus Christ had overwhelmed me with His love, convinced me of His standing as Lord and Christ, and convicted me of my sin and need of His forgiveness.

It was His love as expressed through His words. Like these from Eugene Peterson's paraphrase - The Message.

28-30 “Are you tired? Worn out? Burned out on religion? Come to me. Get away with me and you’ll recover your life. I’ll show you how to take a real rest. Walk with me and work with me—watch how I do it. Learn the unforced rhythms of grace. I won’t lay anything heavy or ill-fitting on you. Keep company with me and you’ll learn to live freely and lightly.”

Jesus. I am a follower of Jesus.  Because He first loved me.
Posted by David Wilson at 12:17 PM 0 comments