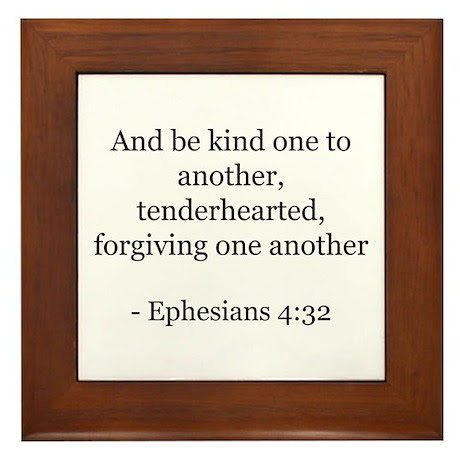 It's Sunday after church and we're going out to eat. Now being creatures of habit, there's a certain set of restaurants we'll likely go to. But on this day we decide to try a new one. Arriving at the table, I notice a couple sitting nearby (among a dozen or so others) who used to be members of New Hope that I haven't seen in a long time. Maybe a decade.

They were great members of New Hope, and friends and supporters of what we were doing as a church... until they weren't. And in one of those things that happens far, far too often, they left in a huff. The minister of music quit, so they quit. They left in a cloud of bitterness and vitriol.

But you forgive and focus on the blessing that they were when they were with you, and move on. No wailing and gnashing, no grumbling and blaming. It's a choice you make, and it's the only one that heals the hurt.

So there they were. I walked over and said "Hi," and mentioned in passing that I had just used the lawnmower they had purchased for the church (right before they left) just a few days ago, so they were still being a blessing to us. Then I walked back and enjoyed lunch.

I was conscious of his looking over at us as we ate, and every now and then I smiled back. They finished their meal and he walked over. He's in his upper 80's now, so feeble he walks with a cane, and after greeting everyone else, he turned to me and said, "I'm so sorry if I hurt you and the church."

He continued, taking my hand in a trembling handshake and with tears forming in the corners of his eyes he said, "Please believe me, I didn't mean to hurt you or the church. Please forgive me."

I looked into his eyes and told him he was our brother in Christ and we loved him and his wife. That I knew he would never mean to harm the church. That forgiveness was his before he had even left on that long ago Sunday.

He hadn't let go of my hand, and when he heard that, his grip grew stronger and his eyes grew bright. We hugged and he and his wife left.

You know, one of us had held onto a hurt for over ten years. It apparently had been something that was always there, like a weight that couldn't be laid down. But on a lazy Sunday afternoon, far from any church, unexpected grace showed up.

I LOVE that about our God.

“Forgiveness is an act of the will, and the will can function regardless of the temperature of the heart.” ― Corrie ten Boom
Posted by David Wilson at 2:20 PM 0 comments

I Forgot Them All

I love this picture!

Maybe it's because I have witnessed this two times from the perspective of the man in the background, feeling the thrill of helping my sons take their first steps toward independence. They are men now, and one has experienced that same thrill.

As they learned to walk, not every one of their attempts was progress. I'm sure there were a lot of times when they sat back down, wobbled into things, or face-planted.

But here's the thing - I cannot remember a single failure. Not a ONE.

Why? Is it age? LOL, no I don't think so. I can remember a lot of moments.

So why can't I remember their failures?

Maybe it's because I've seen them walk. And run. For many years.

You may still be feeling the effects of a failure you had in your Christian faith. It may gnaw at you, rob you of your joy, or make you feel less loved by God.


“I—yes, I alone—will blot out your sins for my own sakeand will never think of them again.: Isaiah 43:25

God doesn't remember those failures. He's the Father who rejoices to see His children living everyday. To see them draw on His strength and His love, facing life's challenges. Sure sometimes we fail, but what does God remember? That we got up and kept following His Son.

So live secure in the knowledge that God LOVES YOU and rejoices to see you living in Him.