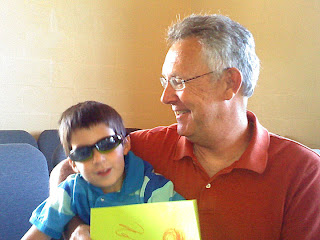 This is me and my man Logan Marston, who has just schooled me on the latest going's on in the world of abstract art and general coolness. Logan's Dad is in Afghanistan for a little while longer and while Bunny and I have often offered to take him home with us, for some reason Logan's Mom Laura wants to hang onto him for a while longer.  Logan is so full of life that getting a picture of him being still only means you panned the camera at the same speed he was moving at. We love him and the rest of the kids God has given us at New Hope.

I think I made some relationships more active with the kids today by announcing that we will be giving "Bible Bucks" as reward/incentives to the kids for certain activities that we believe will help them grow in their knowledge of Jesus. Our Kidmo children's program is really geared to involve the parents in their spiritual education by providing a high quality and impactful children's "MAP" that relates back to that Sunday's lesson and gives parent and child a chance to go over it together.

So to encourage that, we're offering the Kidmo kids great incentives to bring their Bibles, return with the "MAP" completed and signed by a parent, memorize the "Compass Point", and also if they bring a friend they get rewarded as well. We'll have a Kidmo store with items they can redeem their "bucks" for and also they will be able to earn Dairy Queen treats, and at the top level - trips to the area attractions like the Zoo, Gulfarium, Dolphin Cruises, and movies! We're going to have fun and learn about how God wants us to love Him and others.

Summer is coming to a close rapidly here as the school year starts in early August, so we have people scattered all over the US. But the congregation we had today was great. It included our newlyweds - Mack and Lois Kirkland who got married at New Hope last Saturday.

We began with "Mighty To Save", then "Forever" and finally "Amazed". The idea was to get us all thinking about Jesus and build a sense or awareness of just how incredible He is. Our invitation was "Grace Flows Down." While we missed Pam on percussion and John on bass, I really thought the vocalists were so good this morning and that the band did well too.

We continued our journey into Colossians this morning with a leap into some of the richest and Christ honoring Scripture in all of the New Testament.

What can you say about that incredible Scripture?

I related a story Nancy Ortberg told about a friend of hers who took his 8 year old son to the Grand Canyon. They had been talking about how neat God's creation was and trhe Grand Canyon had come up, because they lived within driving distance. They had looked at pictures many times, but one day the dad decided that he was going to help his soon understand it first hand. So he got his son up way before dawn and told him they were going on a trip but would be back later that day. His son was sleepy but excited.

It took a couple of hours to get there, but they arrived and it was still dark. Sunrise was coming soon though,so the dad woke his son and asked him "do you trust me?" "Don't be silly Dad. Of course I do." Then the dad asked his son to take his hand and they would walk a little ways down the parking lot because he wanted his son to see something. "Okay" said the little boy. "But I want you to keep your eyes closed."

They walked to the edge of the canyon and in just a minute or two the sunrise began to appear over the rim on the other side. Once it had illuminated the canyon,the dad told his son to open his eyes.

The little boy did, but for a moment he was silent, and then he said "wow." A few more moments passed as he took it all in and then he added "I had no idea."

I don't think the average person who considers themselves a Christian has embraced that fully. Functional atheism is the result. And it is so much less a life than Jesus died to give us. Read Colossians this week. Give the Word time to work and the Holy Spirit freedom to make the changes in you He wants to make.

New Hope - we are going hard after being known as people who know Jesus, who love Jesus, and who want more of Jesus. Come and see!
Posted by David Wilson at 8:53 PM