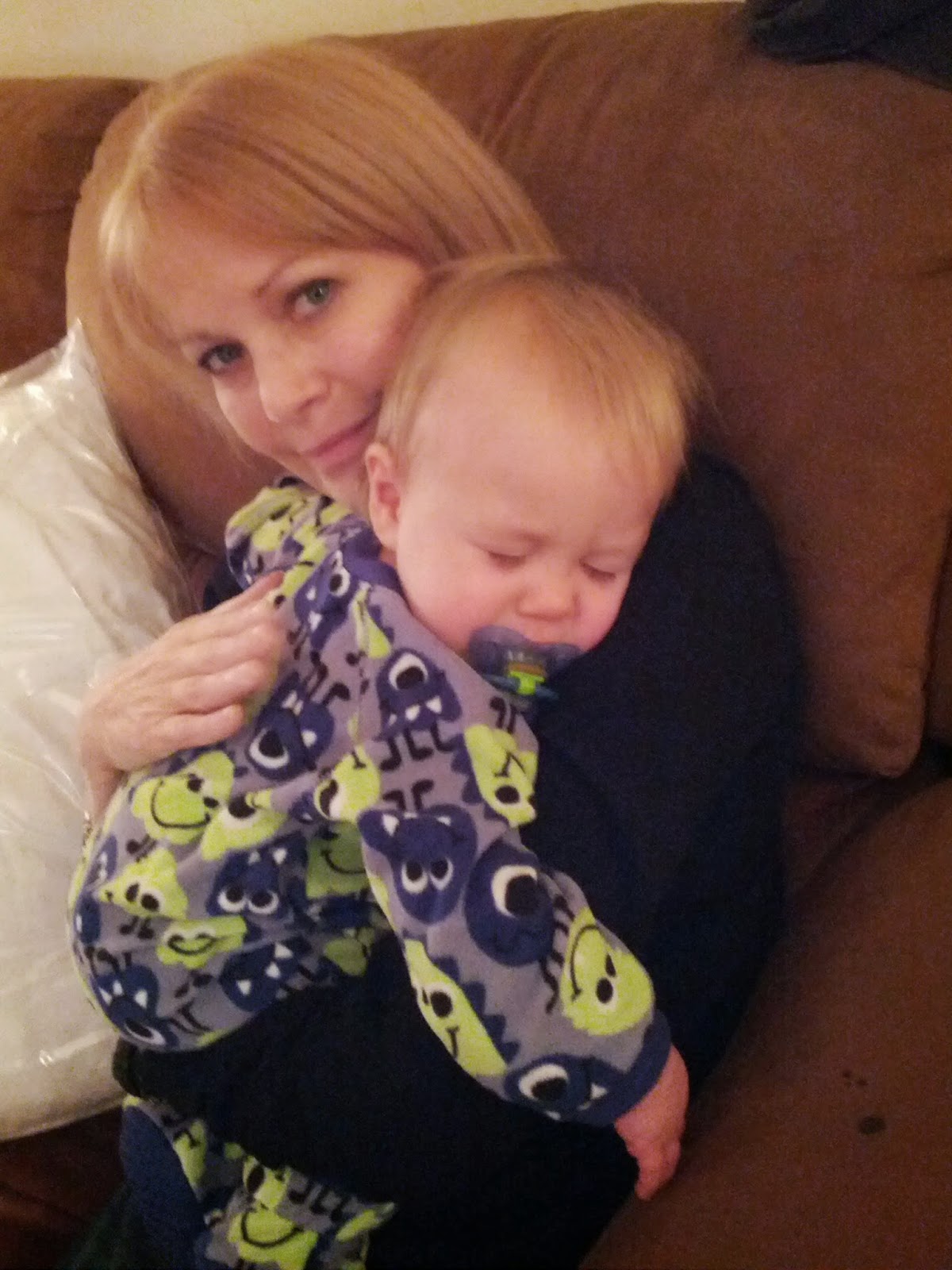 One year ago, Bunny was holding a much smaller Aiden. He's grown so big. Missing him and Adam and Shonda this Thanksgiving, but thankful to be headed over to share Thanksgiving meal with Sean and Chelsea in a little while.When I get to Thanksgiving, I always think of those years as a little kid in Macon Georgia. We'd all pile in the car and head over to my Aunt Geneva's house, just up from the cotton mill on Roff Avenue. All of my cousins would be there too, and so we'd get every opportunity to get into trouble.There was Uncle Ben's bomb shelter, conveniently located under the house, to explore. Maybe we could sneak into the forbidden space of the living room and slide on the polished wood floors in our socks! There were the train tracks to put a penny on, and the post office a block away to visit and see the scary faces of the most wanted. And just down the street was my Uncle Will's store, where barefoot little boys could convince their uncle that his cookies needed to be tested for freshness.Good times. No, great times.Oh there were amazing meals. Collard Greens, pecan pies (no one cooks pecan pies like people with pecan trees in their backyard), my Aunt Geneva's best in the world corn bread, turkey and dressing, and every cake known to mankind. For a kid whose parents both worked, and our normal meal would be a 30 minute wonder - it was a staggeringly impressive feast - every year.And yes, there was football - inside and outside. We'd play outside until lunch, then take some time to properly recover from said lunch by watching the Bears and the Lions or later the Cowboys and whoever they were beating on TV.I was amazed when I sat down to write this, just how much of the little details of events that happened 40 years ago I did remember. The cars they drove, the year my cousin came home from the Army in uniform, the colors and fall chill - all come leaping back to my memory. But you know, what I remember most is the laughter. When my Mother's family got together, there was always laughter. That didn't mean that life for them was wonderful - this was the mill village, and like most families, they had troubles. Money troubles, alcohol troubles, kid troubles, and health troubles.But when they were together, something incredible happened - none of those seemed so large. When I think about it now, I'm convinced that happened because when they came together, they were conscious of just how much they loved each other, and just how powerful that love could be, and was. They really did bear one another's burdens -and not just on Thanksgiving.And when they prayed, it wasn't the 20 second version of grace, it was the recitation of what God had done in the past year for them, how grateful they were for His grace, and how thankful they were that God put them together as a family. Now I look back and see what I couldn't have then. They didn't take anything for granted - they built their lives on that gratitude and love for one another. It wasn't "lucky" that they were together, it was God's grace. And in that grace they dealt with adversity and with blessings.I always came away impressed that if I was a part of that family, I would never lack for love. No matter what I grew up to be, no matter what I was to make of my life, I could always come back home and run right into the arms of love. Several pairs of them. :) I guess that's why, this time of year, I always want to go back to those times when all my family is together. When I can look around and know that everyone there loves one another no matter what life may bring.We love, because He first loved us. And out of that love, we live lives that testify to the grace we have received. We grow our family by opening our arms to those outside and setting another place at the table. Just as no one ever was a stranger on Thanksgiving at the Bowden family's meal, no one should ever be turned away. That's what I think a church should be. One big family. I thank God for the family like that we're a part of called New Hope.Happy Thanksgiving and may God's richest blessings be yours.
Grace and peace,David 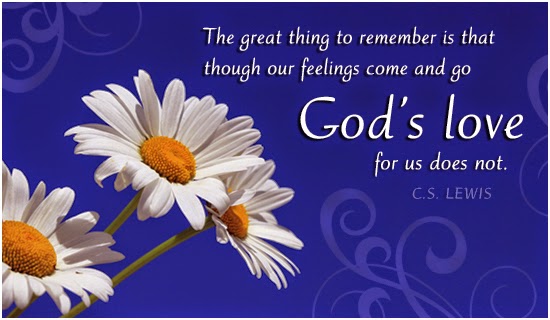 I'm a man who believes in grace and mercy - and who draws strength from those deep wells more often than most realize. As a pastor of a smaller church family that's seen its share of challenges, staying focused on Jesus' love has meant that when the storms come I know they come with needed rain and that they will not last forever. God loves me and works everything together for my good - even if it doesn't feel like "good" at the time. And that same beacon keeps me straight at school too.

Every year as a teacher is different. Obviously there are new children and new parents to know and relate to. Less obvious to the outside world are the changes in what you teach and how you teach. Let's just say we are in a time of extremely rapid change that's affecting everyone.

Teaching relies on a lot of skills, but really good teaching has that and more - good teachers have a character that lets them sway with the wind but stay rooted in their confident belief that if they do the right things every day, children will come through their classroom and leave as better students and better people. Like my work as a pastor though, that belief is tested by the times when you can't see the change happen, or when you look out and see people headed the wrong way despite everything you invested and prayed for.

So you learn to pray for rays of sunlight in the dark days - for glimpses of God's mercy and grace. You say things to Him like "If I could just see one thing go right today..."

In the avalanche of prayers that reach His ears, I'm sure that seems trivial. But absent confidence, teaching becomes something of a roller coaster ride depending on immediate success to keep you going. But this time of year, 12 weeks in, immediacy isn't always there.

Our awards ceremony comes for the first nine weeks and I have only one student who qualifies. Most classes have 6 or more. Four of my kids missed it by one point, but they missed it. I'm trying to shake the feeling that somehow I failed.

So I'm sitting in the audience after my turn, watching the 4th graders troop across the stage and applauding when they do, but harder when my kids from last year do. About halfway through,I notice a kid who had the teacher next door to me last year made it. He struggled last year for a lot of reasons out of his control, and a couple of times his teacher had asked me to talk to him. I tried to let him know that it wouldn't always be that hard, and the best thing he could do was do his best at the things he could control. Then I had him look directly at me when I told him that I believed he could and should be an honors student.

And now he was. That was cool to see, but then it happened.

As the 4th graders filed past me, returning to their seats, the boy stopped in front of me and said, "I did it Mr. Wilson. Just like you said I could."

I replied, "Just like I knew you could. Great job!"

A sense of warmth and love filled my soul. I needed that. I had prayed for that.

Thank you God. You were there for me, just like You said.

Links to this post
Labels: a pastor's life, God's love, men elementary teachers, people who made a difference

Bunny and I had boys, so I'll never experience what my Father in love did that December day back in 1973. Curtis Clinard had boys too - three of them - but he had only one daughter. And on that day, he took a long walk down the aisle of Bethesda Baptist Church and gave her hand to me.

And right now, I'm sitting at the desk he used for so many years to prepare thousands of Sunday School lessons. I'm working on tomorrow's sermon about heaven - the place where God will dry every tear - and thanking God for Curtis Clinard's gifts to me.

First among them was my bride, who has been everything I had ever dreamed of or hoped for in a wife. She's just amazing in so many ways - an awesome Mother to two boys, a great pastor's wife, a soul mate and one true love. There aren't enough words to say everything I could say about her and what having her in my life has meant to me.

But Curtis gave me more than just my bride's hand.

He gave me an example of how a Christian man should live. Over the years I had some opportunities to call on some of his old customers when he was with Carnation-Albers. When I'd mention his name, every one of them would ask two things, "How do you know Curtis?, and "how's he doing?"

Had one laugh out loud when I told him that I had married Curtis' daughter. "You must be some salesman. I'll bet that was a tough sale, because Curtis loved his daughter." I smiled right back and said, "You better believe it was - but it sure was worth it. I got the woman of my dreams and married into a great family to boot."

In every instance of meeting someone who knew him in a business relationship, I heard of Curtis' integrity and genuine desire to build relationships with people and help his customers any way he could. For someone who was just starting out in sales, it was a great lesson. To have people would remember me 10 years or more later in that same way became my goal.

Having Curtis as my father in law was truly a gift from God. One that is still shaping how I live and relate to God and others to this day. If following God is truly a "long walk in the same direction" as Eugene Peterson has written, then Curtis' long walk marked a trail for me to follow, as it did for others as well.

Curtis had a wonderful journey in this life, for God had blessed him with his one true love, Dot. When she passed away, there was less of him. The next few years were not nearly as full of joy as when they were together, but he still brightened up when family came by.

And then he was gone too.

As I finish my sermon on heaven for tomorrow, I'm sure Curtis would approve. The title is "Count Me In" and he already has been.