There's no way I can know. No way for most Americans to know. But that doesn't excuse us on Memorial Day.

Every year we get a chance to grasp the incredible - to appreciate what should for us be a deeply moving and abiding revelation.

Men and women, some barely having reached adulthood, gave their lives - with all that would have held for them - laughter, joy, legacies of family, of love - for us.

I can remember talking with my father, who served in the Pacific theater in WW2, about what he saw - about what he experienced. Most of the time he wouldn't say more than just "it was rough." But when the curtain he had created between him and the horrors came down, it was as if he was seeing ghosts.

When I think back, fragments of scenes he described scare me still.

When a terrifying night where Japanese attacked in wave after wave from the darkness - screaming "Banzai" with officers waving samurai swords ended, my father looked out over a field where "Japanese were stacked like cordwood, and body parts scattered like melons - like cornstalks."

"My friend and I were in a ditch, a little dip in the ground, trying to stay alive. A shell hit right next to him. I turned to look and all that was left was his legs."

Places on a map for me.

Scars that never healed for him. Scars...that...never...healed.

Memorial Day is not for him, as much as he and all those who came back deserve our respect.

It's for his friend, and the others who gave "their last full measure of devotion."

For us. For our country.

Think on these things.

The Power of We 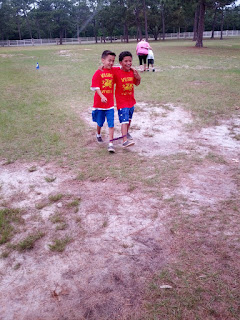 We finished tired and happy today. No, we didn't win a trophy.

But let me tell you what kind of class this is.

We fell way behind in the lap-run. Just wasn't a strength for us. On the second half though, Tyler took over and took off. He made up an enormous amount of the gap. But here's where it gets good.

Every child ran to the halfway point and joined Tyler in his race to the finish, all the while shouting encouragement. Because of that, Tyler got even faster and finished strong.

That's what people - big or small - who truly care about one another can do - they create a climate where what you thought could be accomplished is blown away and a new level of achievement takes place.

I'm very proud of all the academic success I've seen from this class, but this morning may have just been my favorite moment all year.
Posted by David Wilson at 11:21 PM 0 comments