Love Is A Decision 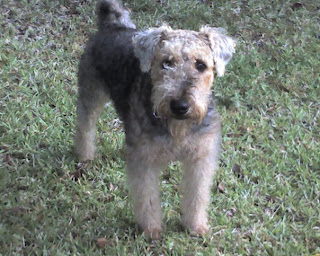 A little over a week ago, Bunny and I adopted two Airedales from a rescue organization here in Florida. After the crushing loss of our Great Dane Henley, it had taken us over a month to get to the point where we were ready to try to love another dog. We're still grieving to this day. But we decided to go and look at the pair - brother and sister, who were in their third "home" already at the age of two.

There were some things we knew driving up to see them.

But we felt that Airedales would be a good match for us based on what we had read, and also based on Bunny's experience with a friend's dog - Bailey the Airedale.

When we reached the place where the dogs were, hope was that we would find a dog that would almost immediately love us fiercely and become an integral part of our lives. Our other expectations were more long term, as we planned to teach them to be therapy dogs that we could take to nursing homes. We learned that dogs in that setting can make a real difference, and wanted to be a part of that ministry. So we had some goals going in.

It's been a week and a half now, and we're realizing that we have to decide to love these dogs for who they are, not because they provide us with what we need. They are far more expressive and trusting than they were going in, but they still are not what we were used to and not what we hoped for - what we loved about Henley. A Great Dane is a "velcro dog". They are where you are and they sit where you sit. They are at peace when they sit or lie next to you on the couch. They would follow you into the shower if you'd let them, and if you won't let them, they'll often lie down just outside and block the door. :) They are very affectionate - "nosing", "leaning", and vocally reminding you of how joyful they are just to be with you.

These guys, the Airedales... not so much.

So we are patiently (most of the time) working with them, teaching them that they can trust us, taking them with us, and training them to follow basic commands. We will actually pick them up and put them on the couch next to us, but occasionally one will jump up on his/her own. Those bursts of love are celebrated to the max. Every occasion we have to reach out and touch them, speak to them, praise or reward them - we take it. Even when they would rather retreat from our companionship, we close the distance and let them know that we love them no matter what.

It is tiring. It can be frustrating. It is tempting to just take them back to the rescue people and find a more loving giant breed dog. That'd be easy. Not going to happen. They are ours. We are theirs. Forever friends.

It hit me last night that what we are doing with these dogs is much like what we need to do in some other communities like say - Church.

Yes, there are times when it will be frustrating, even hard.

Make the decision to love your church.

Just like the Airedales we love have.
Posted by David Wilson at 4:30 PM