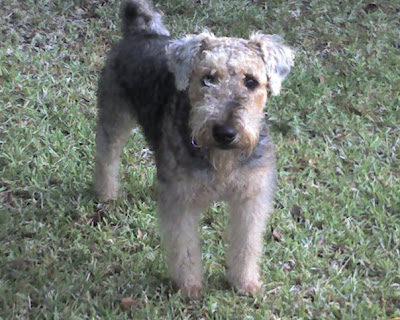 We brought home two Airedales Friday from a rescue organization. They had been placed with a family in Florida and it didn't work out, because the family lived on a farm where wild dogs, coyotes, and snakes caused a threat to them. The female was actually bitten by a snake and that was the tipping point. They are two years old.

The contrast between them and our dear friend Henley the Great Dane is wide and it's not just the difference in size. Henley had been ours since twelve weeks of age, and was conditioned over years to be a very loving dog. He was human dependent. Came wherever you were in the house. Laid down next to you on the sofa. Rejoiced when you came home and grieved when you were gone. Towards the end of his time with us, he was even more clingy and loving.

The greatest thing Henley did for us with that kind of love was that in his giving of it, he took away our stresses and anxieties. There's just something about having a dog lying next to you and being in a state of total calm that causes the human beside them to relax too. From his beginning nuzzle to day's end sigh as he laid down next to the bed, we received a blessing that we had no idea how much we would miss. Bunny and I were at Petsmart Saturday and were both moved to tears talking about just how much we were loved.

Now we have two funny faced Airedales in our home. They are energetic. They are independent. They are self entertaining. They are NOT Henley.

We are trying to love them the way we loved Henley, and they - in particular the girl - Stevie, is beginning to respond. She'll let you put her beside you on the couch and stay there a while. The boy -Mick, can be loving when he chooses to, but still pulls away when you try to draw him near. They have improved since we brought them home Friday, but we really, really need them to love us as fiercely as Henley did. Doesn't have to be the exact same expressions of love. There are things the Airedales do that are unique and cool. But we need to bond with them as fast as we can. Otherwise we might as well not have dogs at all, and they need to be with a family that can love them as they are.

If I sound disappointed it's because I am. It's proving much harder for us to love again.

Would you pray for us?
Posted by David Wilson at 1:17 PM

Labels: david and bunny wilson, grieving the loss of a dog, Henley the great dane, Mick and Stevie the Airedales, Wilson family follies