Sighs Instead of Slobbers 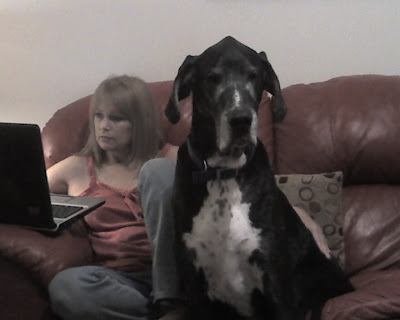 One of the things that marked Henley's last few days was his change in seating arrangements. Until his leg began to bother him, 90% of the time he'd lay beside me on the love seat, and would occasionally visit Bunny on the couch. He'd lie down at the opposite end from her most of the time. In his last days, he seemed to want to be next to her more. We found out it was probably that he was already hurting. But when this was taken, three days before he left us, we thought he just wanted to be close. And he did.

Nighttime is absolutely the worst.
Posted by David Wilson at 12:27 AM

Labels: david wilson, grieving the loss of a dog, Henley the great dane