It's Time - Past Time 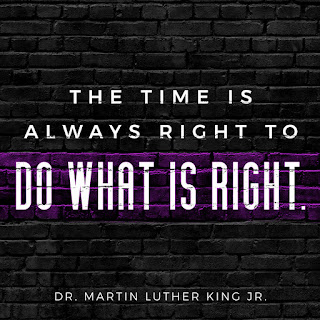 I reread the "Letter from a Birmingham Jail" yesterday, and what struck me about it this time through was that it was written in 1963, but the "fierce urgency" he wrote about is still here. I've thought and prayed about it off and on ever since and I think there are some things I need to confess and one I need to repent of. It's past time that I did. So here goes.

It's time for me to say that most of the history I was taught in the public schools of Bibb County Georgia was biased toward a white-European perspective. I had little exposure to other cultures and didn't begin to gain any until I went back to college in the 1980s. I've learned more since beginning to teach 10 years ago than in all the other years. But I still have a lot to learn. Not only about other cultures, but about the parts of American culture that were hidden from me, even when they were happening.

It's time for me to say that the Civil War was clearly about slavery, and that the people of the South fought to perpetuate that sin. You can say they fought to live as they always had, but that way included owning other people made in God's image. That's a sin. Those men I looked up to and admired - men like Lee, Jackson, Gordon and others were traitors to the Union. No matter what virtues they might have had, they were complicit in the sin of slavery by their actions to prop it up. The cause was evil. At the core. And they, and my ancestors were wrong to fight to keep it going, and I was wrong to honor that.

It's time for me to admit that I have no idea what it's like to worry if I'm pulled over about anything other than a ticket. Or no idea about being followed in stores, or treated differently because of my color. I have always bristled to hear the word "privilege." I understand what it means now. I have that, even if I still don't think the word captures what it is. It has to end. White supremecy has no place in our culture and is anathema to the teachings of Jesus.

It's time for me to admit that I don't suffer the disadvantages of my color, and that I gain from advantages I don't even realize I have always had.

For all my ignorance, insensitivity, and lack of interest in the pain that my black brothers and sisters have endured I apologize and ask your forgiveness. I stand with you in the desire for justice - equal justice - for all.

My heart is broken over what has happened and is happening in our nation. I've been shocked again and again by the rank evil that the police and racist indiividuals have perpetrated on innocent black men and women. I will work to make a change for as long as God leaves me here. His Kingdom come.