A Witness In Wood 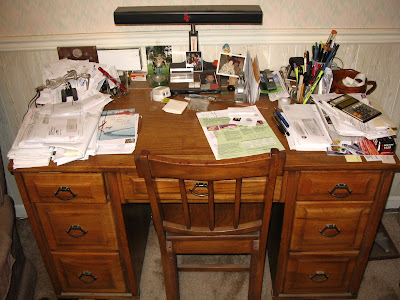 I took this picture a few years ago. It was at this desk, where a man built a career. He rose from salesman, to territory manager, to manage a district for a major multinational company. He'd leave his family late Sunday night or early Monday each week and drive all over the Southeast, returning on Friday. Later on, he'd fly to distant places and meet a salesman that he'd hope to help become better. But every Friday, he'd be home.


Saturday night he'd study his Sunday School lesson at this desk, preparing to teach the class he led for decades.  He was the picture of an expository Bible teacher, and could have been a good preacher if God had led him there. His calling was broader - husband, father, servant, Sunday School teacher. I can remember the men in his class and the respect they had for him as a teacher. But it wasn't just his teaching they were looking at - it was the way he lived his life. There are lots of ways to teach. He led by precept, principles, and by his practices.


He retired from his career, and came home. Enjoyed his wife, his kids and his grandchildren - had a garden, and a shop downstairs. He and one of his long-time friends started a little business building furniture and fixing things in homes. They had a ball helping people, though I doubt they made anything from it. Still every Saturday night would find him sitting at this desk, preparing his lesson. Broadman's Commentary, Standard Sunday School Lessons, Open Bible, Amplified - were the tools of this teacher. In retirement, he did more around the church and around the house. He continued to encourage his pastor, to love his family, and to serve as an example of a true Christian man for us all, until His maker called him home.

In the aftermath, Bunny was struck with the realization that both her parents were gone. Having been through that myself years ago, I knew the feeling of having no "roots" or "pillars" to lean on that losing your parents can bring. There are still times when it sneaks up on me, and Bunny still misses her Mom and Dad a great deal. They were such a blessing.

When Bunny's oldest brother asked her what she would like to have of the things left behind, initially she couldn't think of anything. Then I remembered Curtis' desk. It was such a part of who I saw him as, and Bunny remembered him sitting at it from when she was a little girl. She had recollections of going up to him sitting there to ask him for a new dress, of the crazy "finger in a box" toy, and the silly "goofy glasses" her very reserved daddy would pull out and create laughter. This simple piece of wood was so tied to both of our memories of him - who he was, we quickly agreed we'd love to have it. So she asked with the stipulation that if one of her brothers wanted it, they should have it.

It's here. We brought it down from Georgia a couple of weeks ago.

Every Saturday night I go in my office and sit at that desk as I prepare the powerpoint for tomorrow's message and go over the lesson for Bible Study. I am very conscious of the legacy left me through the memories of Curtis Clinard. His love for Christ was real and penetrated every area of his life.

So when I sit down, it's as if his hand is on my shoulder. And how I wish it was.

Thank you again Curtis. You trusted me with your precious daughter, encouraged and guided me through my married life, and continue to give me a standard to aspire to. I could not have asked for a better Father In Love. See you later my friend. Say hello to Ballard for me, and give Dot a kiss.