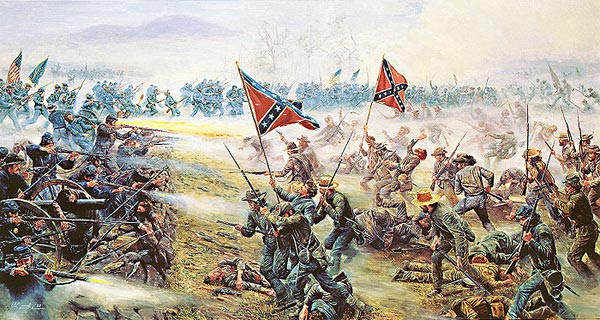 Growing up a generation ago in Middle Georgia meant that I was presented with a worldview far different than that kids receive today.

It was the South, before the advent of air conditioning, when the echoes of the civil war still were heard. Every child in school was taught a particular version of history, long on the heroic actions of people like Robert E. Lee and short on a real examination of why the war was fought.

I devoured the biographies, poured over the battles, and tried to imagine being there. Everything I wanted to know about what the war was like occurred during the first three days in July 1963 - at Gettysburg. I've fought that battle so many times - in turn by turn board games, computer simulations - and watched every movie ever made.

And every time I did it I wondered, what was it like to walk out of the trees with General Pickett and walk directly into the hell of the center of the Union lines. To risk it all for a cause bigger than myself. To decide with that first step, to lay down my life if that's what it took.

I was not alone.

From the pen of William Faulkner...


For every Southern boy fourteen years old, not once but whenever he wants it, there is the instant when it's still not yet two o'clock on that July afternoon in 1863, the brigades are in position behind the rail fence, the guns are laid and ready in the woods and the furled flags are already loosened to break out and Pickett himself with his long oiled ringlets and his hat in one hand probably and his sword in the other looking up the hill waiting for Longstreet to give the word and it's all in the balance, it hasn't happened yet, it hasn't even begun yet, it not only hasn't begun yet but there is still time for it not to begin against that position and those circumstances which made more men than Garnett and Kemper and Armistead and Wilcox look grave yet it's going to begin, we all know that, we have come too far with too much at stake and that moment doesn't need even a fourteen-year-old boy to think ...This time.
Maybe this time with all this much to lose than all this much to gain: Pennsylvania, Maryland, the world, the golden dome of Washington itself to crown with desperate and unbelievable victory the desperate gamble, the cast made two years ago. — William Faulkner Intruder in the Dust
But that victory was not to be.
Thank God.
Though the men who fought for the South fought skillfully, bled and died sacrificially, and though most of them would have told you that they fought for Georgia, or Virginia or their home state, the fact that the leaders of the Confederacy decided to incorporate the continuation of slavery in their constitution meant they were on the wrong side of history. They had a valid point about state's rights. Had they acknowledged the wrong that slavery was, and then fought their battles, things could have been different.
The boy I was didn't see that.
All he could see was an open field, unfurled colors, and George Pickett raising his sword. The chance to have your belief measured against the real possibility of death. To offer your all for a cause.
Ironic I suppose that years later I surrendered to a cause far greater. And I step out of the woods and advance against the culture every day as a follower of Jesus. To give it all.